What do we make of the death of Jesus?

Matthew's Gospel reminds us that this death is significant and that it moves us beyond Judaism and into something new.

Here we have the only Gospel account of what happens to Judas.  Acts tells a different account with both coming to a grisly end.  In Matthew, Judas, like Peter, is repentant of his disobedience.  Judas however seeks to find his forgiveness in the Temple.  The Christian reader in the day of Matthew knows that the Temple has been destroyed.  We now look in another direction for forgiveness.  Another interesting note is that this blood money was used to buy a cemetery for foreigners.  The unclean money was used to buy a field that would be permanently unclean.  And yet, also fitting in that the ministry of Jesus reaches beyond Judaism to Gentiles.  We see this throughout the chapter. 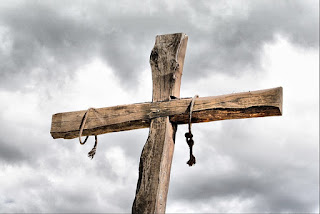 We see that Rome is in charge of the crucifixion.  There are other offenders who are awaiting their fate.  Jesus Barabbas is only given this first name in Matthew.  His surname means "son of the father" which may also refer to Jerusalem.  They later chose to pick up the sword as Barabbas did rather than choose the way of peace and Rome reacted with extreme prejudice in reclaiming the territory in the year 70.

The people as a whole are united against Jesus in verse 25.  This is a reversal in a way of 4:25 when Jesus started his ministry of healing: "And great crowds followed him from Galilee, the Decapolis, Jerusalem, Judea, and from beyond the Jordan."   (NRSV)  Here we see the crowds come from beyond Judaism indicating a broader ministry to the available world at large.

Jesus is mocked and rejected by his own people but also the occupying soldiers.  With the sign, "King of the Jews" he was executed as the leader of an unsuccessful rebellion against the Roman Empire.  The two "bandits" on his left and right were likely also killed as examples of treason against Rome.  Many Zealots in that day were stirring up rebellion against occupation - some openly and others more surreptitiously.  Even these rebel leaders are shown to deride Jesus.

When Jesus dies, the Temple curtain is torn in two.  The barrier between God and the world is destroyed.  The dead are raised but not immediately - this happens after Easter foreshadowing the next chapter.  The world starts to believe.  Note that it is a Gentile centurion who makes the declaration that this is God's Son.

The women who will be the first witnesses to the resurrection are present to witness to his death.  This is a beginning of a changing of the order of the world as men would have been valid witnesses in that culture.   Christianity begins to move past its roots and into a new thing.

On this Good Friday, how does the death of Jesus move you into compassion for people that may seem beyond redemption?

While it can seem overwhelming, maybe our response is to notice it in our locale.  It is normal that we would not want to look at those hurting - Good Friday services are never as full as Easter's.  People can almost become invisible to us.  Take a moment to reflect who may be unseen around us who may be crossing our path.

How does the death of Jesus spiritualize who we see in the world?

Prayer for the day:

God, we would repent of ways in which we have turned away from our Lord.
We know that forgiveness comes in Christ.
Be with us on this day.
If we are unsettled, do not move us too quickly to comfort.
May our grief be a tangible reminder of who you call us to be.
Amen.


Photo by Claudio Ungari via Flickr.com.  Used under the Creative Commons license.