Second Sunday after the Epiphany, Year B

On Wednesday, I watched the protests at the Capitol unfold.  It was a bizarre moment for me and seemed a bit surreal.

Was this really happening?

Am I watching a movie?

The isolation we have experienced due to the pandemic has probably contributed to my doubt that this was really taking place.  Everything outside our house is muted somewhat because we are not regularly interacting with lots of different people.

But at the same time, it seemed all too real.  We have seen our country become more polarized during this same pandemic and largely, I believe, due to the bubble we unwittingly create for safety's sake.  As people choose their own news sources, the emphasis on which "side" you are on can become exaggerated.

Unfortunately, this can create a variety of realities depending on your lens.  If you don't like the reality that is being presented, just change the channel.  It is likely you can find one more to your liking.  We are in a post-truth era where spin is king and any behavior can be justified.

As I read multiple accounts of what took place (from various perspectives), I am starting to see a picture of a great variety of people gathered to protest.  Some were from a variety of extremist groups.  Others were less radical and held public offices from various states.  As the protests intensified, the less radical were caught up to varying degrees with the more radical and breached the grounds.

I've done plenty of things that I was not proud of when I was caught up in the moment.  I've been influenced by people who acted in ways that upon cognizant reflection, were not the mature leaders that I should follow.

But in the moment, you believe that the righteous cause justifies anything.

As I look at this Sunday's scripture reading, young Samuel's first call from God is one where he must rebuke his master Eli.  This would certainly be difficult and problematic.  Yet Samuel states what he was told.  He was probably scared of what Eli's reaction would be.  But Eli doesn't reprimand Samuel.  Instead, he acknowledges his own failure and states, "It is the Lord; let him do what seems good to him." 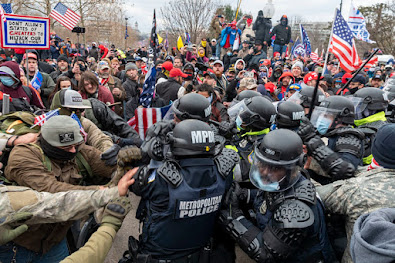 As I consider the violence that erupted last week, the difficult thing is that some continue to justify it or defend it.  Whatever it may have been, it was not a Christian response.  But as some double down on violent uprising, I am gladdened to see even more make the stance that this moment was an aberration.  It does not represent who we are as a country or how we publicly disagree on issues.

I have strong hope that we have turned a corner on unrest and division.  This may have been the moment when we move forward toward reminding ourselves of the values that we hold in common.  I still have some fear is that this was just the beginning and that more violence could ensue in the days to come.

Fortunately, hope is stronger than fear.

I hope that we will look at the example of Eli.  His response to Samuel showed a dignity that allows us to respect him.  If he had responded poorly and threatened his life - if Eli had thrown a fit and railed against Samuel - we would likely not find anything to admire.

Can I adopt this sense of self-examination and recognize when I have been in the wrong?  It is fundamental to the Christian faith.  I hope that I can.  Fortunately, our hope is emboldened by the fact that we do not walk this life alone.  God helps us to become our better selves.

Photo by Blink O'fanaye via flickr.com.  Used under the Creative Commons license.

All scripture quoted is from the New Revised Standard Version Bible, copyright © 1989 the Division of Christian Education of the National Council of the Churches of Christ in the United States of America. Used by permission. All rights reserved.