I used to be more of a stickler for Advent than I am today.

I read a post this week by a pastor bemoaning the invasion of Christmas into the Advent season.  Advent, is the four week preparation time before Christmas.  Technically, the Christmas season for the church begins on December 24 with the Christmas Eve services.

Traditional worship spaces change the paraments or altar cloths from blue or purple to white at this service to denote the change of liturgical seasons.

The original poster thought it sad that Christmas Carols were being sung during Advent at a particular church.

While I understand this feeling, I sometimes get the idea that society at large has left us behind on this.  The culture we are trying to reach are ready to celebrate Christmas and are doing so in the weeks leading up to December 25th.

They are listening to Christmas music on the radio as they shop for presents and head to Christmas parties.  There is usually some obligatory Christmas movie released in the theaters which may or may not have any religious value!

I'm not advocating that we throw out Advent.

I'm not suggesting that we don't include the importance of the waiting or repentance included in this season.

But we do have important Christmas elements that happen during Advent.  Such as beautiful cantatas or musical celebrations such as Handel's Messiah. 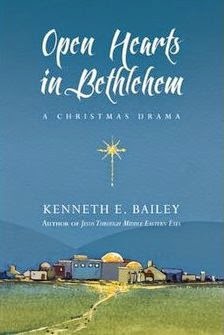 Our own church is presenting a Christmas musical, Open Hearts in Bethlehem by Kenneth E. Bailey on the Fourth Sunday of Advent.  We are presenting it during the Sunday school hour (9:45 am) this Sunday, December 21 in order to capture people from both services as well as providing for a change of pace for the Sunday school experience.  We are also offering a 3:00 pm performance time for those in the area attending other churches or traveling to see it.

I think that it will be spiritually rewarding to those who see it even if it precedes Christmas!  While the majority presenting the play are adults, as a father, I can't pass up the opportunity to give a plug for my children.  Kyla will be playing Mary. Her brother also plays a shepherd so it will be interesting to see him coming to give honor to his sister.  We'll see how good an actor he is!

I must also confess that we sang Christmas carols last Sunday.  We did stick to Advent hymns for the first two Sundays and I did stay on theme with John the Baptist.  But I think our worship was authentic and focused upon God.

As we get ready for Christmas, I would remind us to adopt the attitude of the shepherds who "...made known what had been told them about this child..." (Luke 2:17, NRSV). This means that the birth of Christ should be celebrated far and wide.  And I won't even mind if you open your presents before December 25th!

This Sunday, we'll share in the fourth Sunday of Advent at 8:30 and 11:00 am as I'll be preaching from Luke 1:26-38 with the message, "What Kind of Greeting is This?"  I hope you'll join us if you are in town for worship and for Spirit Act's performance of the Christmas story.

Posted by Sam Powers at 9:03 AM No comments:

The Joy of Getting

She then begins to write, "To me, Christmas is the joy of getting."

Charlie Brown, reading over her shoulder informs her, "You mean 'giving'.  Christmas is the joy of giving."

She looks up at him and replies, "I don't have the slightest idea what you're talking about!"

This comic strip first appeared in newspapers in 1972 and it may be more appropriate today than it was even then.

Have we moved more toward a consumer culture where each individual becomes the sole "reason for the season"?

Or does this show that each generation faces the problem of selfishness and must overcome it on its own terms?

My guess is that the latter is correct.  It's always easier to take potshots at the younger generations rather than face my own shortcomings.

For instance, I like to bemoan the fact that a lot of nondenominational .tv churches advertise their worship as "experience times" which takes the focus away from God and puts it squarely on the individual.  Worship then becomes less about God and more about what you got out of it - what you experienced.  It is easier to critique this change in our culture than it is to critique our own congregation.  After all, we can all agree on how bad the other guy is getting!

This Sunday is the third Sunday of Advent and the Gospel reading for the Revised Common Lectionary is John 1:6-8, 19-28.  In this text, John the Baptist seems to be convincing us that he is not the Messiah (Christ in Greek).  He is pointing toward the Christ.  That's his job.

As we explore this text, we may also discover that we are not the Messiah either.  What if our real job this Christmas was not to get all that we could but to point toward the birth of Christ?

I think quite a few have more than a slight idea of what I'm talking about!

Photo by Niklas Nordblad via Wikimedia Commons
Posted by Sam Powers at 9:54 PM No comments:

Repentance is Better For You Than For Me

I always like to watch A Christmas Carol sometime during the holidays (After writing this sentence, I realize how much society has changed as I’m sure that reading the original book by Charles Dickens was what most people use to do!).  The story gives us a wonderful look into the life of the fictional Ebeneezer Scrooge, a rich old miser who wouldn't give a glass of water to a man on fire.  He sees the ghost of his old friend Jacob Marley which he blames on indigestion.  The ghostly Marley tells him that he will be visited in the night by three more ghosts which show him the past, present and future.  These visions are not to Scrooge’s liking and he awakens to find that he can change how he treats people and begins to do so.

This is a classic story about repentance.  Scrooge repents of his greediness and begins to live generously.  This actually makes him a more cheerful person!  It makes us wonder how we can end up miserable in the first place.  Usually, the problem lies with following the easiest path.  For Scrooge, the easiest path was considering only himself.  But when we end up focusing on ourselves, we lose sight of all that life has to offer.

Much of the time, we don’t consider how our actions may have adverse effects on others.  When we hear about repentance, we may think of other worse sinners than ourselves who obviously need to repent more than we do!

Throughout the entire Bible, different people speaking for God have called us to repentance.  In Advent, we look at John the Baptist and his call to the Judeans of Jesus’ day.  John’s call came before Jesus began his public ministry.  In the classic Christian understanding of entering a relationship with Jesus, the confession of sin comes before the profession of faith in Christ.  Our model fits the Biblical witness of the call to repentance preceding the ministry of Jesus.

As we continue to take the Advent season seriously, this Sunday, the Revised Common Lectionary's Mark 1:1-8 lets us examine what repentance means for our lives just as we consider what it meant for the people in John’s day.  We’ll see how this discipline really does “prepare the way of the Lord” just as John was called to do.  Maybe it won’t even take a ghost to scare you into belief!

May you continue to have a holy season as we approach Christmas.  Don’t forget to make time for God so that the waiting and the season take on new meaning!

Posted by Sam Powers at 8:37 AM No comments: